When Kim and Odessa moved to San Rafael nearly three years ago, they bought a three-bedroom, two-bathroom home that worked for their small three-person family.

When their second daughter was born, however, they knew they’d need to add more space somehow — and they had no more room in the house, but ample room in the backyard.

“As we thought about each child having their own bedroom, I still wanted a place to work in the house, a place for a small office,” Kim said. “Looking into Modern-Shed, it allowed us to reclaim a room in the house.”

Kim’s father, Slim, had had a positive experience with his large Modern-Shed art studio, so Kim and Odessa knew where to turn.

“My dad had had his shed for about a year,” Kim recalled. “We had a perfect spot behind the garage, a 15’ by 15’ area that wasn’t really being used for anything. Initially, we had a landscaper put some sort of tree bark there and we put random stuff, like kids’ toys back there. It was a natural location for us to go and put the shed.”

The couple’s 10’ by 12’ Modern-Shed was installed in October of last year.

“When the actual installation happened, it went very smooth,” Kim said. “In terms of collaboration, in terms of the installation, we have nothing bad to say … The installation team did a really fantastic job. Those guys it together.”

Kim, who runs sales strategy for a networking company, works out of his shed a few nights a week after the kids are in bed or on Sunday afternoons.

“I would give the product itself a rave review,” he said. “Now that we have the shed installed, I have nothing but joy when I go out there.” 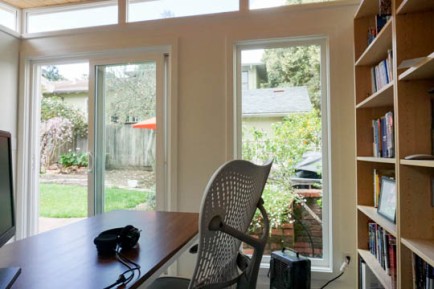 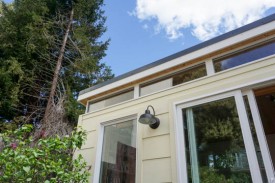