KIRKLAND —  When Cory and Jeremy toured their future home two years ago, they were surprised to find a Modern-Shed already installed on the property.

“It was definitely a cool surprise,” Cory said. “When we saw the studio there during the open house, we thought it would be great for us. My husband does a lot of electronic stuff, working on projects with computers and robotics, and we wanted to keep that away from the kids and cats.”

The couple purchased the home, a four-bedroom 1950s rambler, and turned one of the bedrooms into a guest room, while Jeremy took over the 12’ by 16’ Modern-Shed for his studio.

They could not have expected that over the next couple years, they’d buy not only their own Modern-Shed, but two more, bringing the total number of sheds on their property to four.

“Sometimes I think it’s too many sheds, but then I think it’s so perfect for what we need,” Cory said. “It’s so functional for us.”

First, the couple learned they were expecting another child and decided they wanted to turn their guest bedroom into a nursery.

They converted the 12’ by 16’ studio into a guest suite, since it already had its own bathroom, and purchased a 10’ by 12’ Modern-Shed for Jeremy to use as his studio and guys’ space.

Working on projects close to home, rather than commuting to an office or other space, frees up Jeremy’s time for family and other pursuits, like marathon training.

Meanwhile, the couple faced storage challenges in their home.

“We don’t have an enclosed garage, given when our house was built,” Cory said. “We had this terrible storage shed that was on our property when we bought our house, a small garden shed. We hated it but we couldn’t justify getting rid of it since it still functioned.”

Depending on how you look at it, the couple lucked out when a windstorm crushed the shed earlier this year. They debated whether to buy another pre-built shed sold at hardware stores to replace it, but didn’t like the look or feel of those.

“We were having a hard time finding something we liked,” Cory said. “We worked with Mike at Modern-Shed to come up with a storage shed solution that would be similar in style to the existing studios we had and that could blend into the property.”

Modern-Shed built a 4’ by 10’ garden shed on their property, but the couple also realized that in the space where the

previous garden shed had sat, there was now room for another shed that Cory could use as an art studio of her own.

“I do a ton of different types of mixed media art stuff,” she said. “My husband and I are both makers, we have a lot of projects. The setup and tear down every single time you do something creates a hassle. This is a great way to have ongoing projects kept away from the little ones.”

The fourth shed, another 10’ by 12’ studio, will be built this month and will connect to the guest suite and Jeremy’s shed via a deck.

The sheds are all black with white trim, like the couple’s house, blending in seamlessly.

“I think that the style of the sheds just really goes with our home,” Cory said. “They’re very simple and they’re modern, but they’re classic at the same time. We really like the sloped roofs and (clerestory) windows around the top allowing light in.”

Cory and Jeremy also liked that the sheds were customizable and could come with a variety of doors and windows.

“We were really impressed with the finished quality of the shed that was already here,” Cory said. “My parents cannot say enough about having their own space and not being in other people’s hair when they come here to stay.”

Working with Modern-Shed’s builders has also been a great experience, Cory added. 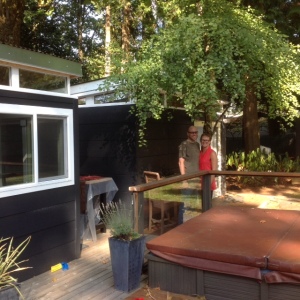 “The process was straightforward. We got exactly what we wanted,” she said. “With the storage shed, they really worked with us to come up with the best design. They were also willing to let us do parts of the electric work. Jeremy had very specific electric needs for his studio, and my brother is an electrician, so it’s nice they allowed them to step in and do what they needed to do.”

Learning they could build a shed on their property without a permit, as long as it was less than 200 square feet, was an eye-opener as well, Cory said.

Due to the way their yard is configured, the couple had a lot of space to work with and much of that space couldn’t have been used for other purposes.

“It can feel like too many sheds, but it’s so right for us, we just really don’t care at this point,” Cory said. “In our yard, that space was just not usable for our kids to play in, so Modern-Sheds work great. They look like they fit and they blend nicely with our home.”

Many of the homes in the couple’s neighborhood, including their own, were built by celebrated Seattle architect Paul Hayden Kirk, and the couple’s home was part of a Docomomo home tour last October.

Docomomo International is the international committee for the documentation and conservation of buildings, sites and neighborhoods of the modern movement.

“There were a lot of people who came through our home and were interested by what they saw in our backyard,” Cory said. “A lot of people need extra space, but they don’t want to build onto the house. Our friends think it’s so cool we can have our own space.”