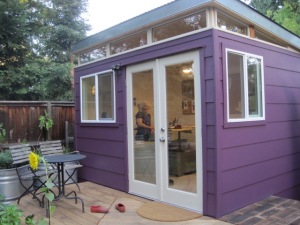 Los Altos — Byron and Elizabeth had been thinking about building a separate, detached structure from their home for years.

Elizabeth, an artist, draws and works with acrylics, watercolor and more, but every time the couple had a visitor, she had to move her work out of the guest room she’d been using as a studio.

“We needed a space,” Byron said. “When guests come, it disrupts her flow. It finally got to a point where we had grandkids who were getting older and would spend the night from time to time. So we decided to pull the trigger.”

The couple explored a few options, but picked Modern-Shed because they liked the look of the units and how responsive Mike Probach from the Modern-Shed the sales team was.

Elizabeth’s cozy 10’ by 12’ studio, with lush purple exterior walls, sits in a corner of their backyard, overlooking her garden.

“The other side of my personality is a gardener,” she said. “It’s an added bonus that now I get a different view of my yard.”

Oddly enough, even though the Modern-Shed art studio takes up space on their ¼-acre lot, more than one friend has commented that the shed makes the couple’s backyard look bigger.

“That was unexpected,” Byron says. “It’s not what you would intuitively think, but it really does.”

The couple’s Modern-Shed was installed in mid-August, with everything going smoothly.

They recommend that other potential Modern-Shed customers think carefully about what they want before installation so that the process goes as smooth as theirs did.

“Thinking about window placement and egress, those kind of things are important to consider,” Byron says. “Even though it’s a small space, it can make a difference. We had the shed angled instead of flush at one point, but the exposure to Western sun eliminated that idea. Thinking about all those items helped us to achieve a successful result.”