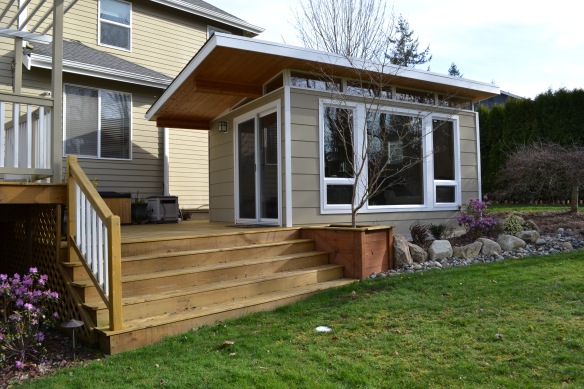 Woodinville, Washington — Music is one of the most important things in Vinay’s life, but a couple of years ago, the software engineer was finding it increasingly difficult to make room in his life for that passion.

“We weren’t necessarily looking for a shed in the beginning,” he recalled. “There wasn’t any space for my music. Everything was spread out everywhere. I had four guitars and music scattered all over the place. I couldn’t find any of my sheet music. It was horrible.”

Vinay initially used a spare room in the couple’s home as a home office-music room-movie room, but the room quickly evolved into just a movie room.

Then, he devoted a separate room to his home office — he occasionally works from home — but that arrangement left little space in his life for what truly brought him joy.

“There was no place for my guitar,” he said. “So I stumbled upon the whole prefab movement, and started noticing there were companies doing it.”

Vinay noticed that Modern-Shed was based in nearby Seattle, but it took another year of contemplating and studying before he finally took the plunge and visited Modern-Shed’s in the Seattle area.

One couple showed him a music studio in Bothell and offered him advice that he eventually followed — go big.

“She said, ‘Don’t hold out for a smaller one, you’ll regret it,'” Vinay recalled. “It was great to see a shed in person.”

Vinay purchased a 12′ by 16’ Modern-Shed and installed an extra long overhang and large floor to ceiling windows that look out over his 3/4-acre wooded plot.

“I thought the overhang would be nice since it rains so much here,” he said. “It’s nice on a rainy day to stand under it and not have to fish for my keys when I’m wet. It would be a pain to have to wear a hooded jacket to come out here.”

Vinay has been playing guitar since high school, and primarily plays classical music and jazz, which he is still learning.

He enjoys having a space solely devoted to music.

“It allows me to focus a lot better,” he said. “I now can just reach for something I need … This is still a suburban setting, but coming here I actually get to enjoy my yard and a somewhat rural space, especially since nowhere in the house looks out at the yard.”

Vinay would advise anyone looking into buying a Modern-Shed to consult an architect, which he did.

His architect friend suggested placing the shed at an angle from the house, rather than parallel, to give it an added visual appeal, and made some valuable landscaping suggestions.

“The crew is great, but they’re not designers,” Vinay said. “It was invaluable to have my friend look at my plans. The shed really flows with the house.”

Vinay is happy that his music space is now separate from his work space.

“Given that it’s the deepest, most important thing in my life, it made sense to have its own space,” he said. “This is perfect. It’s definitely less expensive than putting an addition in your house and you have a sense of being outside. It’s outside, and yet, you’re home.”