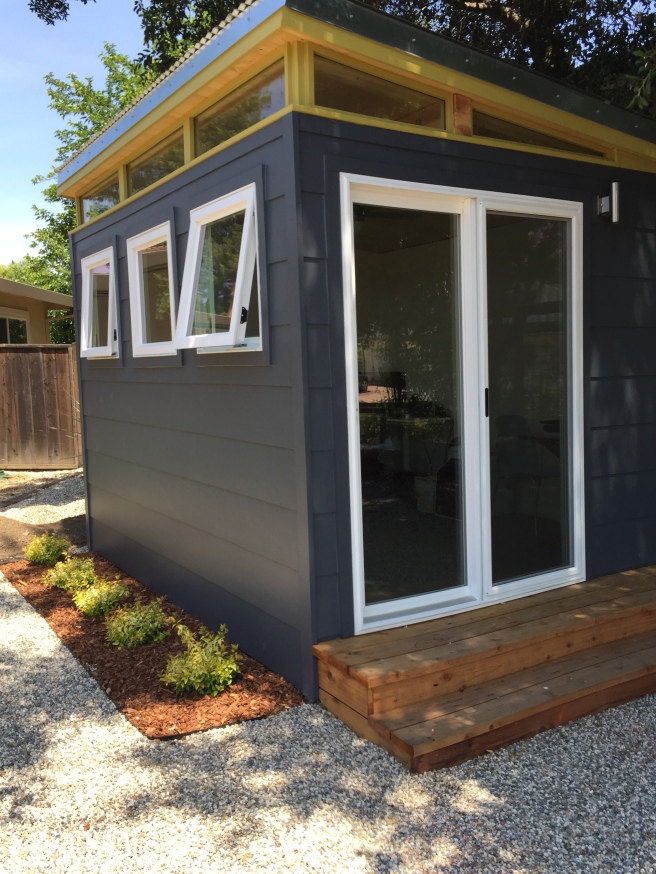 Saint Helena, Calif. —- When Norm and Patti purchased their new home, they knew they wanted a separate home office where Norm’s clients could meet with him privately.

Norm works in the executive search business, finding senior level employees for companies that have hired him to do so, and when he needs to meet with prospective candidates, he needs privacy.

“We had the intent that we would ultimately have a separate home office that would be on the property, but not inside the house,” Norm says. “We liked the confidentiality of it, not impeding into the life of our home. It provides a sense of distance and space for clients and candidates.”

“Most of the time we go to the client’s location, but irrespective of that, the candidates that we start interviewing to potentially present to our client, we do interviews face-to-face,” he said. “Having a safe, confidential place for them to come to was critical.”

Norm briefly considered renting office space — “We could rent space downtown,” he says, “but why? It’s so much easier to walk out the door 10 feet to my office.”

The couple realized their new home already had the space for an outside structure and they found Modern-Shed online.

Norm didn’t want to pursue other companies because he liked what he saw in Modern-Shed.

“The quality seemed outstanding, the cost seemed within reasonable limits,” he says “Spending another half a day running around looking at other things, I didn’t have time for that. There was nothing that alerted me to concern.”

Work began on their 10’ by 12’ Modern-Shed last December, and the installation crew was “incredibly professional,” Norm says.

The couple ran into problems with their electrical work; a contractor had accidently nicked a wire inside the shed, removing part of the wire’s protective coating.

Modern-Shed’s lead contractor, Jerry Johnston, came back out to find the problem, since the electricity in the shed kept shorting.

“Speaking to the quality of Jerry, he arrives with two other guys and spends hours troubleshooting to see what’s wrong,” Norm says. “Fortunately he found what was wrong, that one of the wires had been nicked. Jerry was ultimately able to find where the short was.”

The crew completed the project in four or five days.

“Jerry was as professional as you can get,” Norm says. “My wife had a wonderful dialogue back and forth that resulted in a wonderful final product. The quality is outstanding. The ethics and follow up were perfect.”